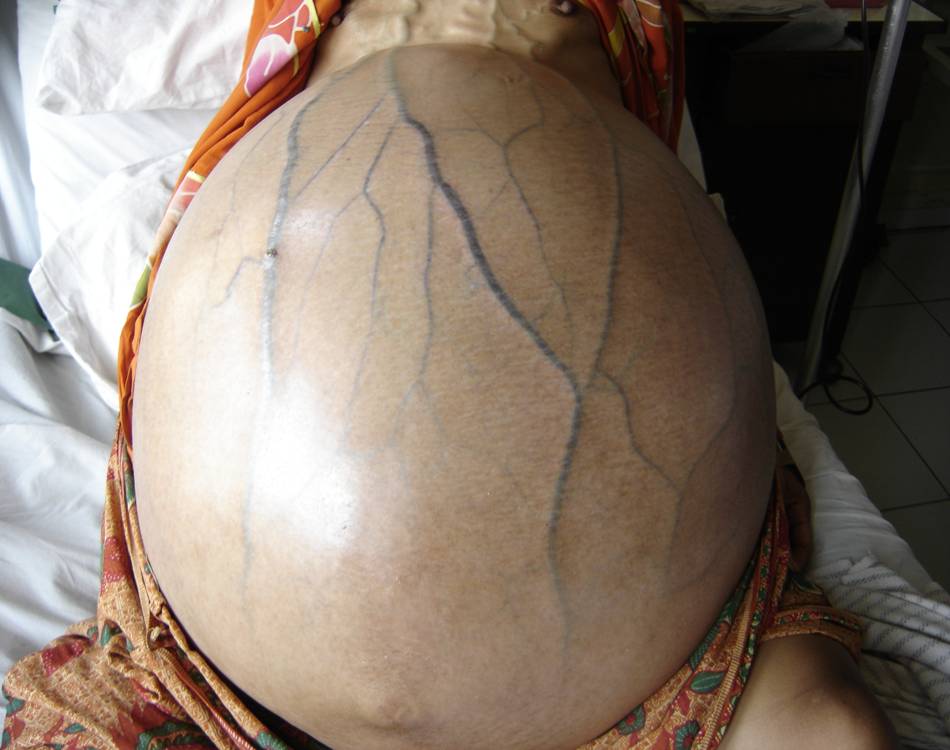 Introduction
Endodermal sinus tumor ( EST ) is second most common malignant ovarian germ cell tumor. The management of these tumor can be challenging, but a rational approach can be outline based on current data. Occurs in childhood, adolescence, and adult life (most <30 years), EST can be pure or a component of a mixed germ cell tumor and almost always a unilateral solid or solid and cystic tumor. (1-2 )
Generally,malignant ovarian germ cell tumor has one of the most successful treatment outcomes in gynecological malignancy. More than 80% of the patients can be cured from this rare type of tumor.EST was highly malignant neoplasm that is radioresistant but responds to combination chemotherapy. Surgery plus chemotherapy is the best treatment for this type of disease and AFP assay may be a useful tool for monitoring patient progress.(3)
Surgical eksploration and unilateral salpingo-oophorectomy are the treatment of EST.Does addition hysterectomy and contralateral salpingo-oophorectomy can improve outcome theraphy ?  How about the role of second-look laparotomy ? Dysgerminoma is extremely sensitive to chemotherapy, and treatment with chemotherapy cures the majority of patients even with advanced disease. Which regime is much better among VAC, VBP and BEP ?. How about the role of gemcitabine base chemotherapy in refractory germ cell tumors?.  Prior to advances in chemotherapy, the prognosis for these aggressive tumours was poor.Over the past decade, new chemotherapeutic regimes have made germ cell tumours among the most highly curable cancers.(4,5,6,7 )

Tumor Marker
Unlike epithelial ovarian malignancies, endodermal sinus tumor can be monitored by a specific tumor marker, alpha-fetoprotein (AFP). Serum levels of AFP can be followed from the preoperative period through the course of chemotherapy. When elevated, AFP has excellent predictability that persistent disease is present.

Surgical Management of Endodermal Sinus Tumor
The treatment of EST consist of surgical eksploration, unilateral salpingo-oophorectomy, and a frozen for diagnosis. The addition of hysterectomy and contralateral  salpingo-oophorectomy does not alter outcome. Any gross metastase should be removed if possible, but thorough surgical staging is not indicated because all patients need chemotherapy. Bilaterality is not seen in these lesions, and the other ovary is involved with metastatic disease only when there are other metastases in the peritoneal cavity. (9)
As chemotherapy can cure the majority of patients even with advanced disease,conservative surgery is standard in all stages of all germ cell tumours. By conservative surgery, it means full laparotomy with careful examination and detailed biopsies of all suspicious area with limited cytoreduction thereby avoiding major morbidity.Wedge biopsy of a normal ovary is not recommended as it defeats the purpose of conservative therapy by causing possible infertility. Patients who received conservative surgery with the preservation of one ovary may retain acceptable fertility rates despite adjuvant treatment with chemotherapy.( 10 )
A case report of a patient with endodermal sinus tumor is presented in which a long-term remission was achieved by unilateral adnexectomy and combination chemotherapy. Review of the current literature indicates that tumor removal followed by combination chemotherapy with vincristine, actinomycin D, and cyclophosphamide is the most effective method of therapy for this highly malignant ovarian neoplasm. The addition of hysterectomy with contralateral ovariectomy or radiation therapy does not appear to significantly improve the survival of patients with this tumor.( 7 )

Second–look laparatomy
The role of second-look laparotomy  in the management of patients with endodermal sinus tumor of the ovary is controversial.Second look surgery is of no proven benefit except in a minority of patients whose tumour was not completely resected at the initial surgical procedure and who had teratomatous elements in their primary tumour
Curtin J.P et all, report two women who converted to a normal alpha-fetoprotein (AFP) level during treatment with combination chemotherapy, yet were found to have residual endodermal sinus tumor at second-look laparotomy.(5,7,11 )

Chemotherapy
Endodermal sinus tumor of the ovary are generally very responsive to chemotherapy,however, they are difficult to manage in the setting of platinum resistance where treatment options are limited and outcomes are poorer.

Combined Chemotherapy ( VBP, VAC , BEP )
Before the routine use of combination chemotherapy for this disease, the 2 years survival rate was only approximately 25%. VAC regimen improve to 60 – 70 %, but VBP regimen is more effective. In the GOG series, only approximately 20%.of patients with residual metastatic disease responded completely to the VAC regime, whereas approximately 60% of those treated with VBP had a complete response. (9)
FIGO Committe on Gynecologic Oncology  recommended chemotherapy regime is etoposide 100mg/m2 per day for 5 days with cisplatin 20mg/m2 per day for 5 days, with or without bleomycin at 10U per day for day 1/8/15 (EP or BEP; various schedules of bleomycin are utilised). When there is bulky residual disease, it is common to give 3 to 4 courses of combination BEP chemotherapy. As BEP chemotherapy is associated with a lower relapse rate and shorter treatment time, it is preferred compared to an older regime VAC, a combination of vincristine,dactinomycin, and cyclophosphamide given in an adjuvant setting.Other tested chemotherapy regimes include combinations of ifosfamide and doxorubicin; vinblastine, ifosfamide and cisplatin;cyclophosphamide, doxorubicin and cisplatin. All patients who do not respond to standard therapy are candidates for clinical trials.Level of Evidence B. (10)

Clinical experience
Hwang EH  reported an 8-month-old girl with EST of the vagina, who was treated with local excision of the mass through a vaginotomy. The VAC regimen was administered, but the serum AFP level remained elevated. A follow-up abdominopelvic computed tomography scan, taken 4 months after the operation, showed local recurrence of the tumor. The VAC regimen was then changed to a BEP regimen (bleomycin, etoposide, cisplatin). The serum AFP level returned to normal after 2 courses of the new regimen, and no tumor was visible on the follow-up magnetic resonance imaging study.
(12)
Shimizu et all, reported pregnancy complicated by endodermal sinus tumor of the ovary in  32-year-old pregnant woman at 19 weeks of gestation Tumorectomy was performed and a diagnosis of primary endodermal sinus tumor of the ovary (stage Ic) was made. Pregnancy was continued without postoperative chemotherapy. At 36 weeks of gestation, she underwent cesarean section combined with second-look laparotomy. A normal infant was delivered and there were no signs of recurrence. Subsequently, three courses of combination chemotherapy with bleomycin, etoposide, and cisplatin were administered. There was no evidence of recurrence at 27 months after initial treatme (13)
Huang H , have published data about the treatment results of 63 cases of ovarian endodermal sinus tumor admitted to Peking Union Medical College Hospital from August 1977 through April 1992 by combination chemotherapy were reported. Patients were divided into three groups. The first group received full courses of vincristine, actinomycin and cyclophosphamide (VAC) or cis-platinum, vincristine and bleomycin (PVB) chemotherapy in adequate dosages (37 cases). The second group also received VAC or PVB chemotherapy but in inadequate dosages (17 cases). The third group took no VAC or PVB chemotherapy but some other chemotherapeutic drugs (9 cases). 28 of the 63 patients died. The 35 surviving patients have been followed for 1 to 15 years. The sustained remission rates were 81.1%, 23.5% and 11.1% for the first, second and third group respectively. As the ovarian endodermal sinus tumor is very sensitive to VAC or PVB chemotherapy an extensive or aggressive cytoreductive surgery and retroperitoneal lymphadenectomy seemed to be not necessary. (14)
Ali Ayhan et all,conclude that there was no significant survival difference with respect to age, histology, and tumor size in twenty-two patients treated for pure EST, and seven patients who had mixed germ cell tumors with EST components. (15)

Gemcitabine-base chemotherapy
There is no standard treatment for patients believed to be incurable after cisplatin combination chemotherapy or carboplatin-based chemotherapy.Previously, new active agents (ie, etoposide and ifosfamide) have been combined with cisplatin in hopes of developing curative salvage regimens or improved induction therapy in previously untreated patients. Paclitaxel and gemcitabine have already been investigated as part of combination regimens.
Eastern Cooperative Oncology Group  reported study of Paclitaxel Plus Gemcitabine in Refractory Germ Cell Tumors and has conclusion that Paclitaxel plus gemcitabine is an active regimen in refractory germ cell tumors, with an acceptable toxicity profile. This regimen has the possibility for long-term disease-free survival in this refractory patient population.
Memorial Sloan-Kettering Cancer Center has used paclitaxel 200 mg/m2 plus ifosfamide 6 g/m2 for two cycles given 2 weeks apart with leukapheresis followed by high-dose carboplatin and etoposide for three cycles with autologous peripheral-blood stem-cell transplants.20 Results are encouraging, with 23 (62%) of 37 patients with cisplatin-resistant germ cell tumors with unfavorable prognostic features achieving favorable responses and 15 (41%) persisting for a median period of 30 months.(18,19)
Jeyakumar A.reported a a39-year-old woman who had a platinum-resistant yolk sac ovarian tumor ( EST ). She achieved complete remission on an innovative regimen of docetaxel, gemcitabine, and thalidomide.(20)

Summary
Conservative surgery plus chemotherapy have resulted in an appreciable number of successful management of endodermal sinus tumor,but we must careful in the setting of platinum resistance where treatment options are limited and outcomes are poorer.
AFP is a useful tool for monitoring patient progress, on the other hand, the role of second-look laparotomy  in the management of patients with endodermal sinus tumor of the ovary is being debated. Every patients need an individual assessment of the most suitable combined chemotherapy.